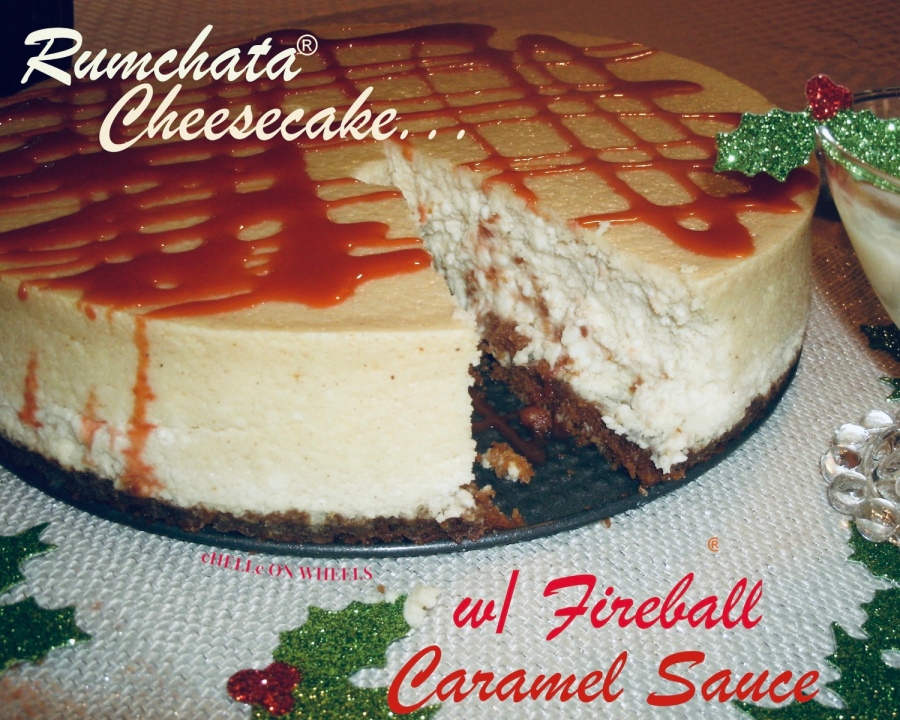 After 5 years since publishing, and 163,000 shares on FB, Rumchata Cheesecake is still getting hits and comments.

Every year around Thanksgiving the post blows up and stays popping through January. It is the recipe that put this blog on the map and helped me decide to actually try becoming a member of the .com food world. No one knows who I am, but they know Rumchata Cheesecake.

It has been copied, revised and published relentlessly, but I assure you that when I made the cake in November of 2014, it was an original recipe, which is why it went crazy on the web.

Sometimes you gotta bring the proof because you know there are people who doubt you. I brought it.

I’m feeling petty AF today, not going to lie. I’ll get over that, but I’m also going to own it.

Here’s the screenshot to the original post on Fakebook. 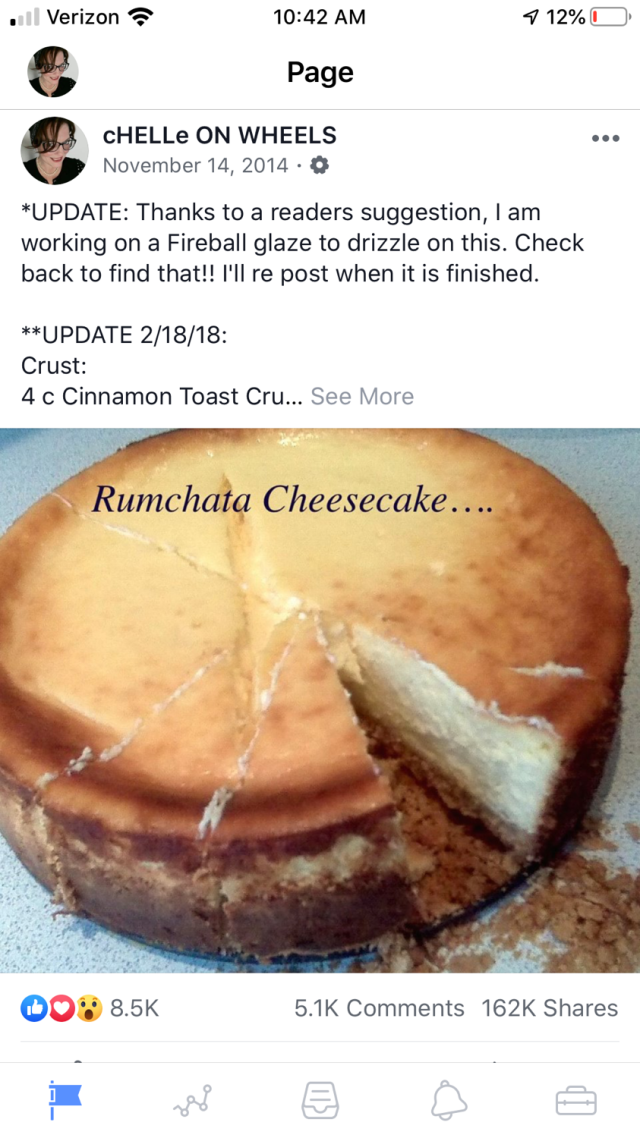 This site even went so far as to rip off the original ugly picture for their version of the recipe. Who. Does. That?? 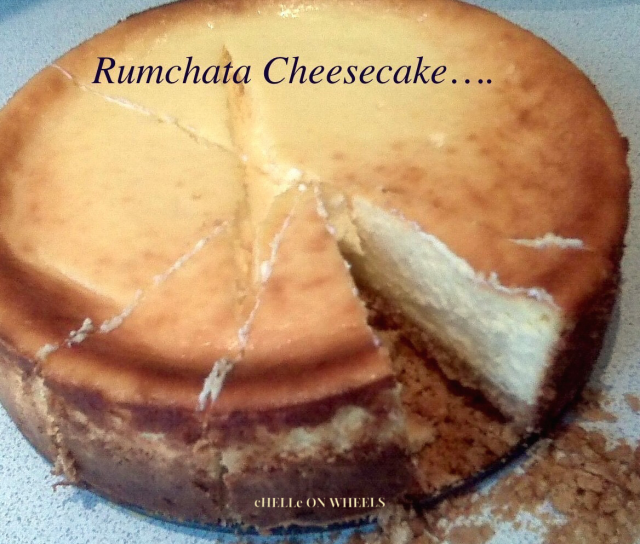 I have since updated the recipe and the pic. I also added the “Wheels” watermark, but I still want to stand strong on the fact that when people use other’s content or ideas, they should give credit where it is due. There is a code that should be honored, but whatever. I’m not always correct, and this is a new kind of a world where things like ethics or doing the right thing are ever elusive concepts.

The next time I made the recipe, I was improving on my pic skills a little, but still trying too hard… 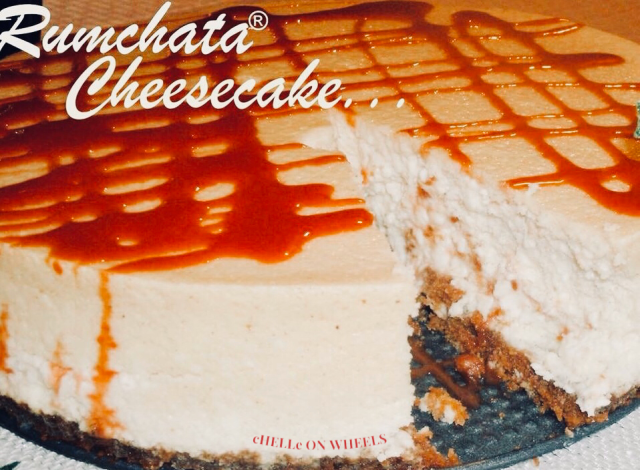 It is a much improved cake and only slightly improved photo. The addition of the Fireball Caramel Sauce was on point when I gave it another go in 2016.

Maybe the original before crop was better. This pic looks like it came straight out of the Goodfellas Christmas party scene. 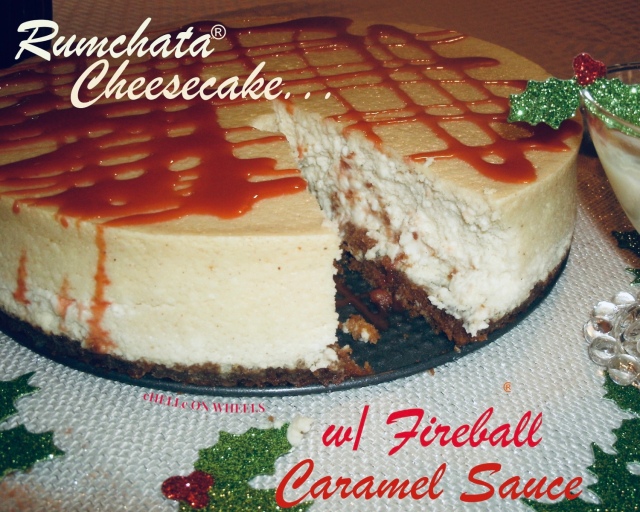 Anyway, enough with the petty business. They say imitation is the highest form of flattery, or something like that, but I disagree and think it’s annoying AF.

To this day, I am super proud of this recipe, and at a time when I was all about the “likes” and comments to feed my fat ass ego, it was the recipe that lit my fire and gave me some healthy confidence. Enough to start and stay somewhat committed to this; likes or no likes.

As I skim through the web I see many like it, and the Betty Crocker site, I have to say, has stellar pics of their version, but you can’t match an original, so here we go!!

For the record, I’m not making the cheesecake today. I’m not making anything but tea and BP coffee. It’s been a weird week at work, and to be honest, I’m still a little pissy over last night’s shift. I woke up with that shit show on my mind.

This morning I’m going to drop this post and then spend a few hours working on my book, because in all honesty; I might be close to ready to check out of the service industry. I’ve been serving, bartending or bossing for 30+ years. I love it with all my heart, and most of the time I think, even if this blog or the book started to make me a sustainable income, I’d still serve.

Let me be clear.

No the fuck I won’t.

Or at least that’s how it feels today.

Some humans simply suck, and I’ll be glad to share an example. If you loiter a table for hours without ordering, if you tip shitty or treat servers like dirt; you are one of those humans.

If you need to have a meeting at a restaurant, great. Order your meal, pay your damn server and tip according to, not just the bill, but the time you hold up that table. Then meet for as long as you want!!

I’ll never ever be public about where I work, and no one I know reads this blog anyway, so there’s not an issue with being afraid of backlash from any bitching I do here. For the record though; most of the time I LOVE what I do and where I work, as well as most of the people I work with.

To hell with shitty humans, though. Try not to be one. End rant.

Things are going to happen over here. The book, and possibly a podcadt in the next 2 years are in the works. I am currently looking into a “Chelle On Wheels” channel on YouTube as well, but the remodel has to be complete for that project to ever come into fruition. I have drive, ideas and a bomb support network beside me. Thank you all!! I just have to stay patient, diligent, focused and far from people who don’t believe in me and who are low-vibe or negative. That has been a huge downfall of my own, but I am figuring things out.

Sorry for the rabble. You know how I am. Let’s make cheesecake. Well, you make the damn thing. Just thinking about it is making me feel better.

Before we start, you’ll want to be aware that this thing is huge and requires a large springform pan. It’s a big cheesecake.

I also suggest using a silicone pan liner wrapped around the springform, rather than the foil. This product became available after the original post. I have one and I looove it!!

I know the question will be asked whether to still use the water bath. I say yes. It just keeps everything from drying out and keeps the baking nice and even.

Another thing I’ve recently discovered, and will always use for cheesecakes, are parchment rounds. They keep the bottom from burning and they also take on the excess butter from the crust.

In your food processor, crush cereal to fine crumbs.

Press in bottom (and part way up side if you want) of 10-inch springform pan that is lined with a parchment round.

When crust is cool, wrap bottom of pan with heavy-duty foil, or the silicone liner I mentioned above, making sure it goes up the sides a few inches.

Wrap pan one or two more times with foil.

Beat in 3/4 cup sugar, followed by eggs, one at a time, and egg yolk, beating well and scraping bowl after each addition.

With mixer on low, beat in remaining filling ingredients until smooth.

Place in oven and create a water bath by carefully pouring a few cups of hot water into roasting pan–enough to go up sides of cheesecake pan a bit, but not as high as the foil.

Bake about 1 hour 45 minutes or until cheesecake is golden on top with a little wiggle in center.

Cheesecake will fall slightly (but should still have a flat top).

Remove from oven, place on rack to cool 1 hour.

To remove cheesecake from springform pan, wrap sides of pan with towel dampened with hot water until towel is cool.

Loosen side of springform.

Cook over medium-high heat until sugar melts and mixture comes to a boil.

Boil about 1 minute, maybe longer depending on your stove. Be patient with it and stir, stir.

Remove from heat; cool at least 10 minutes before drizzling over cheesecake.

There you have it. A show stopper of a dessert that is just perfect for the winter and Christmas season.

Enjoy. And if any of you make it and take a better pic, please send it to me with permission to use on the blog!!

All my silly Cooker love, Chelle.

Unauthorized use and/or duplication of this material without express and written permission by the owner is strictly prohibited. Excerpts or links may be used, provided that full credit is given to M.L. Clement or cHELLe ON WHEELS, LLC. with appropriate and specific direction to original content.

28 thoughts on “THE Original Rumchata Cheesecake”