This pie was inspired by the need for something to accompany the homemade rum raisin ice cream a friend gave me over the weekend.

I considered trying my hand at Shoofly Pie, and then a rum raisin cake, but wasn’t in the “cake” mood. I even thought some oatmeal cookies might be the way to go, but this one ended up the winner.

A fellow blogger did a pear something or other not long ago, and I remembered that, but didn’t want to go back through all the recipes. I had a pie crust in the fridge left over from the last dessert, so the decision was made. This was the end result. 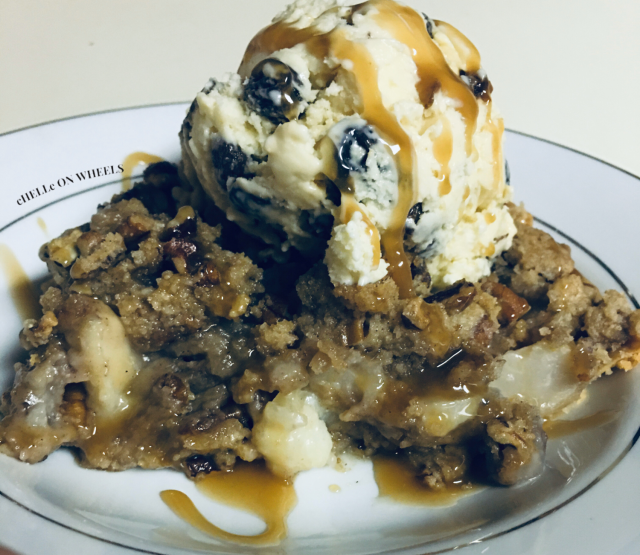 Be sure to use a deep dish pan for this recipe. Even a 10 inch spring form if you must, but a regular pie plate won’t work. It’s a lot of fruit and streusel.

I’m not sure what goes on in the oven between the pears and the heat, but what I found upon cutting the pie was that the fruit filling turned almost creamy. It’s hard to explain, but it was an absolute delight to sink my teeth into. Twice.

After the first slice with the rum raisin ice cream and a drizzle of caramel, I found myself challenged to not go in and slice off another bite. And another. Soon, visions of Miranda Hobbs eating an entire chocolate cake one bite at a time started dancing through my head, and I remembered there was another person in the house who might want to try it, so I finally wrapped it up. Not gonna lie. I ate a quarter of that thing and I have a whole lot of zero regrets.

This pie is phenomenal with or without ice cream or caramel. Trust me on this. I tried it all.

As I noted in last night’s post, we are going to get straight to the food, so gather your ingredients and let’s get a pie on the table.

Pastry for single crust pie, your recipe or store bought

Prep pears by peeling and cubing or slicing them. I cubed because I feared slices might get mushy. It worked out swimmingly.

In a large bowl, stir pears, apple juice, 1/4 cup of flour and brown sugars, and then add in the nutmeg.

Set aside and get your pastry prepared. In my case, it was unroll and lay in the pan. I don’t do fancy edges because I use a deep dish pan, and with prepared crust it doesn’t stretch far enough. It’s cool. I like the rustic look that results from this, and I also never eat the outer thick crust. It’s too much for me.

Once the crust is situated, pour the pears in.

Make the streusel by adding all the ingredients to a large bowl and cutting in butter with fork, 2 knives, pastry cutter or your gloves hands. Work it in until it is crumbly.

Sprinkle the mixture over the top of pie.

Place the pie on a baking sheet to be safe of spill over.

Bake 1 hour or more depending on your oven.

Remove and allow to cool 1 hour. It will still be warm after the hour. Now you get to get a slice out and see the magic.

When you cut into that first slice and it stays firm without the fruit spilling all over, it feels like a major victory. That’s because my hungry ass usually can’t wait that long.

Look at that. Firm. Sturdy.

Ok. Now you can eat this plain Jane, but as I said, the entire thing was created around the rum raisin ice cream I got from a friend and I was using it.

A bit of caramel drizzle and BOOM!! It was an unforgettable winter dessert.

Lemme show you that again, but up close.

I never took that first bite pic. You know why. I was busy!!

I’m going to be making a lot more pear recipes, I know that. I see a pear berry something or other in the near future.

For now though, I have to close this recipe and get my mind off pie. It’s Monday. I’m super rested and highly motivated at 7AM, so I best get on the mat and mill before the sleepy sneaks back in.

Unauthorized use and/or duplication of this material without express and written permission by the owner is strictly prohibited. Excerpts or links may be used, provided that full credit is given to M.L. Clement or cHELLe ON WHEELS, LLC. with appropriate and specific direction to original content.